The Language of Comic Books: Common Mistakes Made When Translating Comic Book Stories to Other Media, Part 3 of 3

The central struggle in any mythology is test of the hero – the journey into the underworld – where the hero must face his or her flaws and overcome them.

Note: This series of articles is going to review the mistakes most often made with movie and television adaptations of comic books and discuss the best ways of translating comic book mythologies into other media formats. (If you missed them, check out part 1 and part 2.)

Journey into the Underworld

The most common mistake adaptations suffer from is actively confusing the villain with the journey into the underworld.  What is the difference?

The journey into the underworld represents that tragic flaw that the hero suffers from and must eventually overcome.  The villain represents the road not taken by the hero.

Iron Man stunned audiences not just because of Robert Downey jr, smooth special effects, and fun story.  This movie mastered the most difficult aspect of comic book translation into other media.  The movie understood that Iron Man is about Tony Stark overcoming his guilt for being an “iron monger” – a merchant of death.

Stark is literally taken to cave where he must confront his own demons about his place and his effect on the world.

The look on Stark’s face when he realizes that his weapons are hurting innocent people is devastating.

He knows that he has made the world a worse place than if he had never been born.

A Failure to Understand the Underworld

The Fantastic Four is one of the most important comic books in history with characters that have been loved for 75 years.

Why did the movie fail to capture the magic?

It had a good cast, dastardly villain (perhaps the greatest villain in comic book history), and nifty special effects.  What happened?

The movie is a basic slugfest between Doom and the Fantastic Four.

This cartoon translation shows a superior translation of the feel of the comic book. It immediately shows how they got their powers and that it was the fault of Richards. The team explores strange things and has adventures, but really this is all an excuse for Reed to entertain his friend until he can find a cure.

Reed Richards becomes a super hero not to fight crime, but to make up for what happen to his friend because he was careless.

Discover the hero’s underworld and you find the meaning to their mythology.

Did you enjoy this article?  I recommend you check out the following megapack containing short stories from my Heller Mysteries series. 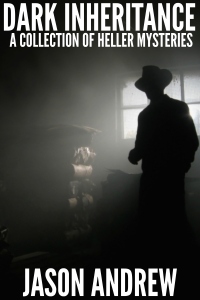 Dark Inheritance: A Collection of Heller Mysteries
The Heller family has a sacred secret passed along from generation to generation.   During the Battle of Hastings, Jørgen Hellyer fought for William the Conqueror at Battle Abbey. His unknown deeds that night brought forth a curse upon all of his descendants. Unto each generation of the Hellyer lineage comes a champion that must face a trial of darkness and blood. Some rise to the challenge and become heroes destined to fight against evil until they die alone. Others fall to the hunger of their corrupt souls.  The Heller Mysteries were created and written by Jason Andrew. Read the stories that chronicle generations of the Heller family facing the true terrors that haunt the world.