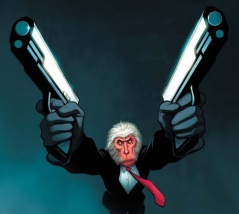 The rotating roster has become a hallmark of the team, although one theme remains consistent: the Miscreant Monkey Crew seeks out misadventure that no single self-styled hipster can withstand alone — hence their battle cry, “Monkeys Assemble!”

Tales of the Miscreant Monkey Crew is a series of essays and mostly true essays about the misadventures of a group of friends exploring the city of Seattle published in the Seattle Sinner.