Publication: Whispers from the Abyss (Fear and Loathing in Innsmouth: Richard Nixon’s Revenge) 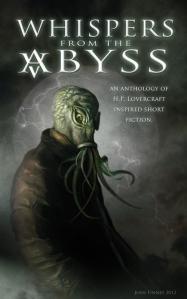 My story in this anthology was a sequel to my novella “Fear and Loathing in Bat Country: Hunter S. Thompson Versus Dracula.”

Whispers from the Abyss
On the subway, during lunch, or even under the fluorescent glow of your cubical—there is no escape! Now your slow descent into madness can follow you through the day, as well as the night. The WHISPERS FROM THE ABYSS ANTHOLOGY is the first ever H.P. Lovecraft inspired collection created specifically for readers on the go. All 33 spine-chilling tales are concentrated bites of terror which include works by Greg Stolze (Delta Green), Nick Mamatas (Shotguns v. Cthulhu), Tim Pratt (Marla Mason), Dennis Detwiller (Delta Green), Greg Van Eekhout (The Boy at the End of the World), A.C. Wise (Future Lovecraft), David Tallerman (Giant Thief), Silvia Moreno-Garcia (Future Lovecraft), John R. Fultz (Seven Princes), Chad Fifer (The H.P. Lovecraft Literary Podcast).