The Deed is Done, the Doers Undone: The Competition of a Milestone

I am writing this entry on a sunny, Sunday afternoon.   My dog Otter is snoozing on the couch lazily.  My loving wife Lisa is watching Breaking Bad behind me.

I’ve hit a milestone of personal and professional importance this afternoon and I felt the need to somehow mark it for posterity, even if only to reread in the future.  The world changes us when we’re least prepared for it.  I thought about this a good deal while taking Otter to the dog park this morning.  When you are working on a project, days and months pass in the blink of an eye between chapters, playtests, and public previews.

As some of you might know, this year the majority of my professional effort and spare time has been spent as the Developer for the upcoming Mind’s Eye Theatre: Vampire The Masquerade from By Night Studios.

The By Night Studios Development Team has spent the last month in revisions based on feedback, playtests, and internal development.  It hasn’t been an easy process.  We’ve sweated blood to make this project. 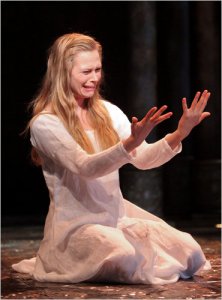 Lady Macbeth says, “That shit ain’t ever coming out!”

It felt like a never ending secret marathon where occasionally I wanted to hide in the corner and gouge my eyes out with a dull spoon.  It felt like the proper punishment for Hubris from the gods for having the audacity to reimagine MET: Vampire The Masquerade.

Doubt plagued me constantly on this project.  I combated this by researching more than I ever imagined possible.  I monitored a number of different LARP organizations, read through different philosophies ab out gaming (became enamored with Nordic LARP ideas and applying them to American-style LARPs), and tried to escape outside of the tribal knowledge that can sometimes trap a creative person.

I couldn’t have made it through without the support of my wife Lisa.   Thank you to Ree Soesbee, Kevin Millard, Jen “Loopy” Smith, and Jason Carl for being brilliant creative partners.  I couldn’t have survived this long, strange journey with out each one of you and your genius.  Special props for David Bounds for jumping in mid-stream to serve as Playtest Manager and taking a large number of burdens off my shoulder so I could keep moving forward.  Thank you to BNS (Jason, Shane, Elissa, RIc, and Bob) for giving us this wonderful once-in-a-lifetime opportunity to touch a dream.

Working on this project has taken a toll on my heart.  It is difficult it to pour everything you have into a project and then not be able to share this with your friends and community that serves as a support system for a creative type.   A number of friends rose to the challenge and helped keep me sane.  Some were kind and generous beyond my expectations.

I wanted to give a proper shout-out to the various people that either helped me with a bit of research to see a different perspective or cheered me up when I really needed it:  (and not in any particular order, just as they showed up in my gchat): Chris Beron, Bobbi Beron, Audra Kelly, Kayla Preston, Andrea Barr, Jess Hartley, Jim Flood, Joe Walterbach, Stephan Empson, Mae Empson, Ron Paul, Tony Mungo, Meredith Gerber, Leah Chase, Jeff Fowler, Jessica Kleczynski, Phil Jones, Trevor Mayes, Randy Ochs, Chris Pozsgai, Sara Morris, Steve Bynum, Christopher Williams, Holly Houtekier, and Kara Swenson.

I remember the first day I saw Vampire The Masquerade as a Sophomore in College,  I bought the supplement The Hunters Hunter to run for my friends.  I had vague dreams of writing for White Wolf, but never imagined it would be possible.   Twenty year later, my first Vampire The Masquerade work appeared in Hunters Hunted 2.  Life feels just a little bit bizarre right now.

Today, I finished the Development Review for the last chapter (Chapter Two: World of Darkness) and sent it to Loopy, our Lead Editor for final copyediting.

There are a couple of minor tasks, including approving copyedits, fiction, fixing the credits page, final review, and preparing for Blood and Betrayal: Secrets of the Grey Ghost for LA By Night 2013.

The mountain has been conquered and the flag has been planted and somehow I managed to survive with my sanity mostly intact.

One thought on “The Deed is Done, the Doers Undone: The Competition of a Milestone”