Busier Than a One-Legged Man in an Ass-Kicking Contest: Project Updates

My love of words and expressions sprang from listening to my colorful relations as a child.  There were a number of explicit gems regularly spat my virgin ears.  Grandma Betty used to say “X thinks that she’s hot shit on a shingle!” when she was irritated at a particular relative, which was often.

I think my favorite expression was from my Grandma Loni.  “I’m busier than a one-legged man in an Ass-kicking contest.”

Just like Grandma Loni described It.  Be happy that I didn’t post a picture of the other expression.

The truth is that I am indeed quite joyfully busy.  I’ve been blessed with a number of wonderful opportunities.  I figured rather than deluge you with a number of smaller posts about my fiction and RPG writing that I would collect them and send all of the various announcements in a single batch.

I have a number of upcoming fiction appearances this year and I’ve created a page to help you track them.

I am the co-editor of the upcoming anthology The Future Embodied.  This is an anthology of speculative stories exploring how science and technology might change our bodies and what it means to be human.  We’re in the process of trying to raise funds through a Kickstarter.  Please support the small press pay writer better.

The Kickstarter for Hunters Hunted 2 has been quite successful thus far, but there is still plenty of time to pledge your patronage and receive awesome coolness.  This was my first freelance project for Onyx Path Publishing and the Classic World of Darkness.  I wrote two of the chapters for Hunters Hunted 2: Character Creation and Numina.

If you substitute Theo Bell for the Thing, this is pretty much how I imagine Justin felt about our conversations.

I can only presume that Justin Achilli paid off karma at vastly accelerated rates by taking the time to walk me through the freelance process and answered my many, and I can only assume really annoying, questions.  I learned a good deal from his feedback and he helped me to become a better writer.  Sometimes this is a rough business and you don’t have time to show such kindness.

Anarchs Unbound was my second Onyx Path Publishing V20 project.  I had the honor of writing the Character Creation chapter, which Justin has recently posted as part of the Open Source project.

I am a hot redheaded Tremere that command flames, you have no chance in this.

My current Onyx Path project is to work on a couple of chapters for Rites of the Blood for Developer Eddy Webb.  You can see the development outline here.  I am writing Chapter One: The Ivory Tower and some of Chapter Six: Secrets of the Blood. 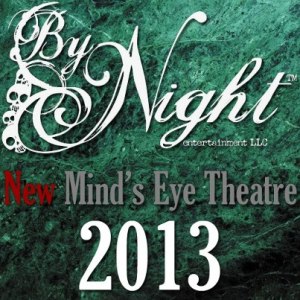 By Night Entertainment, LLC, has signed an exclusive worldwide license with CCP Games to produce a new product line for popular live action game franchise Mind’s Eye Theatre.  You can read the press release here.  I have accepted the role as one of the lead writers for the Mind’s Eye Theatre line.  Currently, we’re asking for feedback from the community on a variety of different forums.