A Year of Writing Roundup

I spent many years dabbling at writing.

I chased what seemed interesting without an actual plan.  I wrote only when I felt like it.  I wanted to reach the next level.  I wanted to learn to write well consistently.  I knew that 2012 would be the last year before I turned 40.  What would happen to me if I didn’t really try at least once?

The ghost of future’s past haunting me telling me I’d regret life or would pretend to be Hunter S. Thompson and never write.

I realized that if I really wanted a career in writing fiction that I would need to work at it as a second job.  I resolved that for the year 2012 I would break through to the next level and to do that I needed to apply the lessons learned from my fifteen years as a technical writer to the task.

This required a higher level of discipline.  I reduced my time spent on other hobbies.  I ensured that work was done before play.   I planned break weekends and date night with the wife to ensure I had a life that sustained long-term writing.

The year started out very well.  Ellen Datlow released her Honorable Mention list for the best horror of 2011.  Datlow is considered by many to be the gatekeeper editor for the horror genre.  My story “Moonlight in Scarlet” published in Cover of Darkness made the list.  I was over the moon as you might imagine. 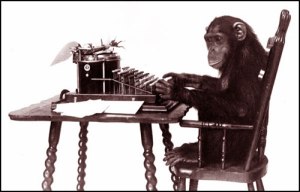 They say any monkey can write

Thanks to the encouragement of friends, I started attending conventions for the purposes of learning the trade and making contacts.

And you thought your conventions were scary!

I started teaching a formalized version of a series of lessons I’ve gone through with friends at convention.

I had previously dabbled with working with role-playing games, but this year I moved forward in a big way.  I worked on revisions for games that I played in college.  It felt very surreal.

I started an editing project with Mae Empson.

We’re going to be accepting submissions for The Future Embodied early next year.

I wrote more fiction this year than ever before.  I managed to make it into a new of awesome anthologies.  Next year, I am eligible for active membership in the Science Fiction and Fantasy Writers of America.  I need one more professional sale for horror to make it into the Horror Writers Association.

Here are some metrics.  I should note that a majority of my written work for the later half of this year is still pending review.

Stories Sold for Publication in 2013:

One thought on “A Year of Writing Roundup”