Method Writing: How I Make My Muse My Bitch

The Greeks believed that there were actual physical goddesses that acted as muses for writers and poets.  I like to think of the creative part of my brain as my muse.  It doesn’t always cooperate.  Sometimes I have to trick it.

Dustin Hoffman is famous for his use of method acting. There is a famous story involving the filming of The Marathon Man where Hoffman stayed up for three-days straight right before a scene to mimic the sheer exhaustion of his character in the movie.

Laurence Olivier, considered one of the greatest actors that ever appeared on-screen, asked Hoffman why he looked so tired.  Hoffman explained about method acting and reportedly Olivier paused for a moment and then said, “Try acting, you fucking douchebag!”

What does this have to do with writing? How does this help me control my muse? Writers are a curious breed. We’re like finicky cats; each of us has our own methods that work perfectly for us. I have discovered that some of the techniques for method acting help me break into a story if I am having trouble.

My lovely and talented wife Lisa noticed something unusual about my writing habits.    If there was a small element tied to a personal experience inserted into the story, it became easier to deal with the more fantastic or complex elements.

Back in 2005 I was having difficulty writing my first Lovecraft Mythos story for an anthology.   I loved the universe, but I found it difficult to imagine the sheer terror that Lovecraft described in his own fiction.

My teachers told me to write what I knew. What did I know about cosmic horrors of an unfeeling universe? (Author’s Note: Feel free to insert your own Dick Cheney joke here.) 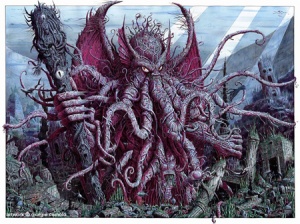 I’ll give you a personal experience!  BWA-HA-HA-HA!

My wife Lisa suggested connecting the story to the Ape Caves at Mount Saint Helens.  She had taken a Geology class that summer and we explored a number of interesting geological sites located in the Pacific Northwest.

Something triggered the neurons in my head. The muse was pleased and I was able to connect my own limited experiences to what was happening in the story and it almost wrote itself.

“Geometry of the Soul” was published in Arkham Tales: Stories of the Legendary Haunted City (Call of Cthulhu Fiction) (November 2006).

Method Acting is a series of techniques that help actors identify with their characters.   Method Writing is using personal experiences to connect with the fantastic elements in a story.  I have never been to moon or seen unknowable cosmic horrors from the edge of reality with the possible exception of my  8th grade math teacher Mr. Hoff.

However, I have collected a series of life experiences and perspectives unique to only myself in the universe that I can share.

I’ve never played in a magical poker game with the deck of cards that was used the night that Wild Bill was shot in Deadwood.  I have a feel the pain of being seperated from my child and I have lost loved ones.

I’ve never been possessed by an alien.  I have had a virus in my eyes that caused horrible problems.

I wish I could say that I learned this lesson quickly. It took several years for this concept to properly seep into my conscious and slowly my writing improved. When I reviewed my early work for Twilight Temptations: Tales of Lust, Desire and Magic, it dawned on me that my best stories were the ones that I could relate to on a personal level.

I once wrote a whimsical story titled “What You Need” for a fun zine titled Edge of Propinquity abouta food critic that visits a mystical restaurant that always knows exactly what to serve him.  I grounded the story in Seattle by placing it in a familiar location near Pike Place Market.   The element that I think works the best is that the main character terribly misses his grandmother that helped raise him.  It is something I highly relate to and I managed to share that honest feeling in the word.

“What You Need” has elicited the greatest emotional response from my readers in part it is a situation to which they can relate, even if they weren’t close to their grandmothers.  It turns out that the very element that makes it easier to write a story might also be the trick to capturing the hearts of readers.

One thought on “Method Writing: How I Make My Muse My Bitch”