Old Man Take a Look at Your Life

Life as a freelancer writer is chaotic, wonderful, and frightening.

I love my current contract with the Mouse. I work on a laptop in the company cafe because my office has two other technical writers in a very cramped space and I get warm easily. The only downside is that the windows are open providing a spectacular view of the city of Seattle. I have to sit behind a curtain least I spend the day staring at the Smith Tower. The only downside is that I’ve had to brush up my Java skills.

I had a difficult choice to make last week as a fiction writer. A small press that shall not be named made an offer on The Highway West. Knowing that another believes in your work enough to publish it is a heady matter especially when you’ve been trying to get others to look at your book for almost a year. I read through the contract and it felt wrong. I won’t go into details, but I politely turned them down. I believe in this series and I hope that one day I am able to share it with you. I have faith that I will eventually find a hope for this book.

I managed to finish the drafts of two short stories in the last couple of weeks. I need to edit them this weekend.

“Spinach Salad and Heirloom Tomatoes: Lessons from the Victory Garden” was difficult because I couldn’t decide how to tell the story. I wrote a first person and a third person version of this story. I am letting Lisa read through it to decide.

“What I Did This Summer: A 7th Grade Essay by Suzie Sampson” was a story I wrote for Michael Dyer when he won the cover contest for Twilight Temptations.

I am currently working on three stories for various anthologies:

“Nothing Has Changed of the Sorrow in Store” is a sad little ghost story involving Michal and the Witch of Endor. Michal is the daughter of King Saul who was killed by a ghost he demanded that the Witch of Endor summon for advice. Michal laters marries King David, but first she has to prepare the body of her father for burial. This is a strange little story.

The last story is untitled, but involves Ed Wood and the Lovecraft mythos.

I am what I like to call a method writer. I have to be able to experience the emotion of a scene to write about it properly. This week I returned to working on the sequel to The Highway West titled A Wicked Messenger. There is a scene where the main characters have forgotten to fill their gas tank and it starts a major fight. This has been surprisingly easy to write. I have a major phobia about running out of gas that can trigger anger and anxiety. I have been in huge fights with my wife over stopping to get gas. My mother used to push the envelope and often we ran out of gas during the summer waiting on the side of the road for a friend to help us. I hated that helpless feeling and have been channeling it into this scene. 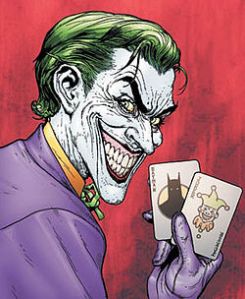 Yesterday, I dusted off an old comic book script that I wrote as a sample for DC comics titled The Joker’s Crusade. It was rejected, but it ain’t half bad. I might post it for giggles. I have a number of rejected media fiction in my files. I should share them as examples.